Berjaya Food, which opened at RM4.08, three sen higher from its last adjusted closing price (LACP) of RM4.05 a day earlier, rocketed to a high of RM4.55 in the morning trade session.

The counter, which subsequently pared its gain throughout the afternoon session, then saw a sudden surge in the final 30 minutes of the trading day, peaking at a new high of RM4.57. 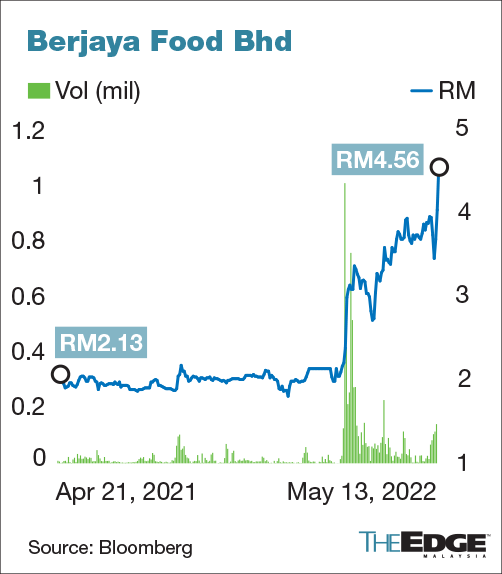 On Wednesday (May 11), Berjaya Food said its net profit for the third quarter ended March 31, 2022 (3QFY22) more than doubled to RM31.58 million from RM11.61 million in the same period last year in tandem with higher revenue recorded for 3QFY22.

Revenue for the quarter jumped 35.37% to RM246 million from RM181.73 million due to higher same-store-sales growth, particularly from Starbucks cafe outlets as a result of the improved mobility upon the resumption of domestic tourism and further relaxation of the Covid-19 standard operating procedures.

On prospects, Berjaya Food expects the overall operating results of the group to be satisfactory for the remaining quarter of the financial year ending June 30, 2022 following further easing of restrictions and the opening of international borders.